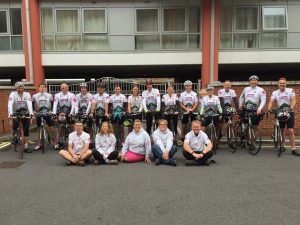 For the third year running I was lucky enough to be part of the Tour de Frimley support crew, looking after 16 brave cyclists who covered nearly 700 miles in Northern France for the Frimley Park Hospital Breast Care Appeal. We left Frimley on 27th August 2016 and returned on 4th September. To date the team have raised about £30,000 which is their most successful year to date. You can follow their full journey on their Facebook page. With Tour de Frimley and Ride 4 Frimley, cycling has achieved a staggering £100,000 in fundraising over the three years of the appeal. Thank you all very much for your efforts and commitment. Thank you also to the teams sponsors 3PWRR (The Tigers), Brooks and Partners, Brandtastic and GearedUp Cycles.